Businessman whose Rs. 7.5 million was stolen dies of heart attack 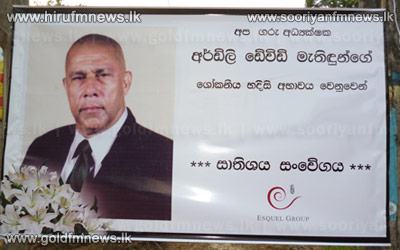 The businessman who was robbed of 7.5 million rupees by an unidentified group at Ekala Ja Ela last Tuesday died of a heart attack this morning.

The victim was identified as Earldley David, 56-year-old businessman of Kadirana, Negombo.

Hospital spokesman said that he was pronounced dead at the time he was admitted to hospital.

A group of 5 unidentified persons who arrived in a vehicle robbed the businessman who was carrying money to be spent on his daughter’s wedding scheduled to be held tomorrow.

Human Resource Manager of the factory Indika Gamage described the incident to our news team.

Although 10 days passed since the robbery, nobody has been arrested as yet.