6 persons including 5 fishermen dead due to inclement weather; 17 fishermen missing 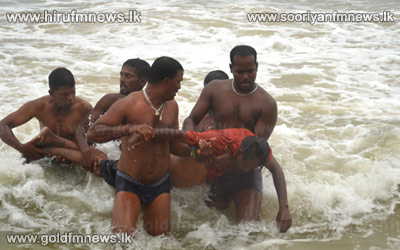 The National Disaster Management Centre states that 6 deaths have being reported due to the inclement weather conditions being experienced at present.

5 fishermen who had set sail from Beruwala, Ahungalle, Galle & Ginthota have been killed when their boats capsized while an individual has died when a tree collapsed on him in the Kolonna area.

Moreover according to the Deputy Press Director of the NDMC Sarath Lal Kumara the sluice gates of several reservoirs have also been opened.

Meanwhile the armed forces have commenced rescue operations to salvage fishermen who have been stranded at sea.

Army Spokesperson Brigadier Ruwan Wanigasooriya speaking to our news team expressed the following views with regards to the operations which are currently underway.

Naval Spokesperson Commander Kosala Warnakulasooriya  expressed these views with regards to the role of the navy which is spearheading operations to rescue fishermen who had set sail last night.

However Deputy Minister of Fisheries Sarath Kumara Gunarathna speaking to our news team noted that his ministry was tasked with looking into the welfare of distressed fishermen.

Moreover the Ahungalle police has received 12 complaints with regards to 17 fishermen who have gone missing since last night.

Incidentally the group had set sail from Ahungalle last night.

Furthermore 10 more fishermen currently continue to receive treatment at the Balapitiya Base Hospital.

According to our correspondents several homes have been destroyed due to sea erosion which has occurred in Chilaw coastline.