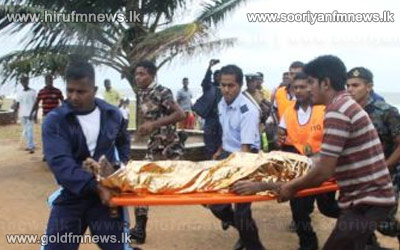 President Mahinda Rajapaksa has directed the Secretary to the President to appoint an Emergency Committee to look into the death, injuries and missing persons due to the adverse weather condition in the past few days.

The main task of the Emergency Committee would be to find out the real cause to the catastrophe and why these fishermen were not warned of turbulent weather forecasts to enable them to take precautionary measures.

The President has also instructed Secretary to the President Lalith Weeratunga to submit the report without delay.

Meanwhile the death toll of Saturday’s disaster has risen to 42 and 23 victims were reported from the Galle district, 18 from Colombo and Kalutara districts and one from the Negombo district.

14 bodies of missing fishermen were found washed ashore today between Ambalangoda and Ahungalla.

The Disaster Management Center stated that the victims were residents of Ahungalla and Ambalangoda areas and their bodies were lying in the mortuary of the Balapitiya Base Hospital.

Ahungalla and Ambalangoda police obtained a special court order from the Balapitiya Magistrate to hand over the bodies to the relatives after initial investigations as the bodies were in a decomposed state at the time of discovery.

Meanwhile, Fisheries Associations state that the MET Department should be held responsible for the deaths of fishermen.

Speaking at a media briefing that was held today the Chairman of the Fishing Vessel Owners Corporative Society Tudor Edirisooriya stated that the Director General of the MET Department should accept the responsibility and step down from his post.

Director General of the MET Department H S Kariyawasam however, replied as follows.

Meanwhile, Opposition Leader Ranil Wickremesinghe stated that the collapse of state mechanisms was witnessed during the recent disaster situation.

However, UNP Parliamentarian P Harrison speaking at a meeting in Anuradhapura expressed a novel view about weather forecasts.