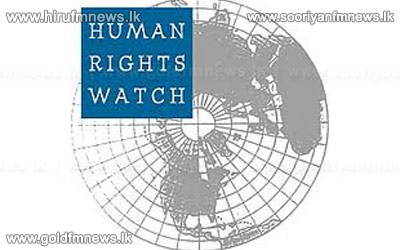 The Human Right Watch stated that the recent statement made in parliament by UPFA MP Arundika Fernando on missing journalist Prageeth Eknaligoda should be challenged.

Executive Director of the Human Right Watch Asia Division Brad Adams said the ruling party MP’s statement that the missing journalist is living in France should not be taken for granted.

The Human Right Watch also stated that the Sri Lankan government has a responsibility to investigate into the MP’s statement as the parliamentarian has not exposed sufficient details to prove his claim.

MP Fernando making a statement in parliament on the 5th of June said that missing journalist Prageeth Eknaligoda is living in France.

2 days later, the MP made another statement in parliament and said that he received information about Eknaligoda from another journalist Manjula Wediwardana who is also residing in France.

However Manjula Wediwardana denied the MP’s claim and said that he did not meet the MP in France.

Meanwhile MP Arundika Fernando said that he made the statement in parliament with responsibility.

During the last media briefing to inform the Cabinet decisions, Minister Keheliya Rambukwella expressed the following views on the statement made by MP Arundika Fernando in parliament.