President and JHU in a special discussion; Muslim congress says no to amendment. 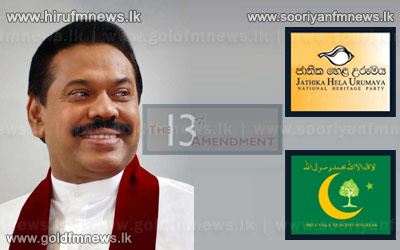 JHU leaders met President Mahinda Rajapaksa at Temple Trees last afternoon for discussing about the 13th amendment to the constitution.

The President’s Media Unit said that the JHU’s five point-proposal that the JHU wants inevitably fulfilled before setting up the Northern Provincial Council  was discussed at this meeting.

On this occasion the President had pointed out that two of the five points had been submitted to the cabinet.

On this occasion the President also said that when taking vote in parliament on the amendment to the constitution UPFA MPs would be allowed to cast their votes according to their conscience.

Meanwhile SLMC supreme council including SLMC leader Rauf Hakeem met last night to discuss on whether the party would support or not support the amendment to the constitution.

At this discussion it had been decided not to support the amendment to the constitution.