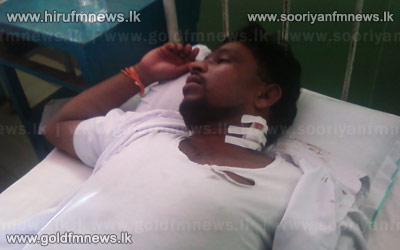 Wilgamuwa Pradeshiya Sabha Chairman Jayantha Weerasekera was admitted to hospital with cut injuries after he was allegedly attacked by a group of unidentified men led by a parliamentarian today.

He was first admitted to Hettipola hospital and later transferred to Dambulla hospital.

Hospital sources stated the Pradeshiya Sabha Chiarman was out of danger.

The attack was launched on Weerasekera as he was participating in a “Divi Neguma” awareness program with his followers in Kumbuk Oya area.

After his admission to the Hettipola hospital, Jayantha Weerasekera expressed his views to our news team

The Pradeshiya Sabha Chairman’s mother was also present at the program when he was attacked by the group.

Wilgamuwa police spokesman said that they have not received any complaint in connection with an attack on Wilgamuwa Pradeshiya Sabha Chairman.