Details of the capsized vessel near Christmas Island today. 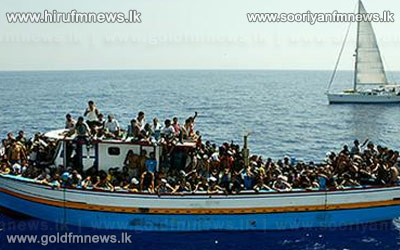 The External Affairs Ministry stated that no evidence was found so far to prove that there are Sri Lankan illegal immigrants occupied the boat which capsized at sea near Christmas Island on route to Australia.

External Affairs Ministry Secretary Karunathilaka Amunugama said that the Sri Lankan High Commissions in Australia and Indonesia were already instructed to verify whether there were Sri Lankans among the victims.

Accordingly he stated he is scheduled to obtain a report regarding the incident.

Australian Coast Guards observed this boat last Wednesday before it capsized and Australian media reported today that the 55 illegal immigrants occupying the boat were dead after it capsized near Christmas Island.

The rescue operation launched by the Australian government has also been abandoned as the rescuers found neither the bodies of victims nor the wreckage of the boat.

Australian media presumed that the illegal immigrants sailing in the ill fated boat were from Iran, Iraq, Afghanistan or Sri Lanka.