Changes to the 13th amendment to the Cabinet today. 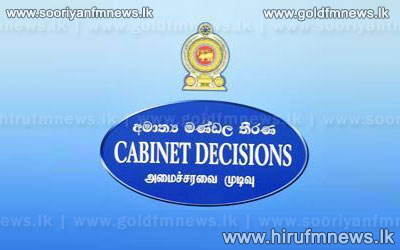 The President last week gave one week ultimatum to discuss the 2 clauses of the 13th Amendment after government coalition members Ministers Rauf Hakeem, Wasudeva Nanayakkara and Douglas Devananda requested for time to take a decision on the issue.

Recently at a press briefing Cabinet Spokesman Minister Keheliya Rambukwella stated that a final decision will be taken at this week’s Cabinet meeting.

Accordingly the matter will be taken up at todays cabinet meeting.

Government coalitions hold different opinions on the proposal to change the 2 clauses of the 13th Amendment.

Sri Lanka Muslim Congress General Secretary Hassan Ali said that his party’s objection to the proposal was submitted to the President in writing yesterday.

Deputy General Secretary of the Communist Party S. Sudasinghe told our news team that the President was requested not to present the proposal to change the 2 clauses of the 13th Amendment when the Cabinet meets today.

However the NFF holds a different opinion.

Former MP, politburo member Piyasiri Wijenayaka expressing his views had this to say…

Media spokesperson of the JHU, Nihantha Sri Warnasingha stated that even without the support of the Muslim congress and the left parties, the cabinet approval will be granted.