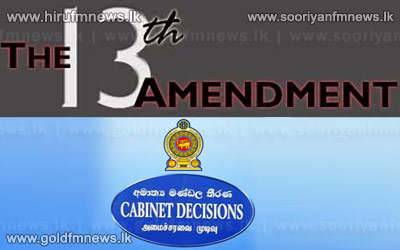 The Cabinet meeting presided by President Mahinda Rajapaksa is taking place at Temple Tress at this moment.

Top on agenda of the Cabinet today is to discuss making changes to the powers vested on Provincial Councils.

The President presented the proposal to the Cabinet last week, and later he gave one week ultimatum for his coalition parties to submit their opinions on the matter.

General Secretary of the Sri Lanka Muslim Congress Hassan Ali told our news team that his party submitted its objections in writing to the President yesterday.

The left winged allies of the government requested the President yesterday not to take up the 13th Amendment move for discussions at the today’s Cabinet.

Meanwhile the President is to chair a meeting of the Central Political Bureau of the Sri Lanka Freedom Party this afternoon.

Sources close to the SLFP stated that the discussions will be centered on the Provincial Councils that are supposed to be dissolved soon and the move to make changes to the 13th Amendment as well.