Robbers disguised as police take away 10 .5 million rupees from a laggala house. 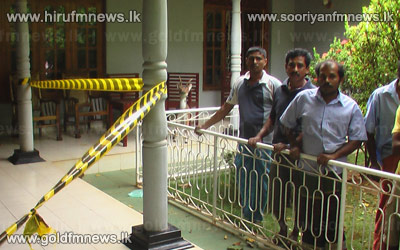 5 police units have started investigations to arrest the 5-member gang who robbed gold, gem and cash worth 10.5 million rupees from a businessman at Laggala in Matale last night.

Officer in charge of Laggala Police told our news team that investigations are already underway on the information including those recorded on the businessman’s mobile phone.

The robbers who arrived in a van had introduced themselves as policemen and entered businessman U.G. Mutubanda’s house around 8 in the night.

Later they locked up his family members in a room before they ransacked the house for nearly 3 hours.

Businessman Mutubanda said that the robbers clad clothes similar to that of clothes worn by security personnel.

The businessman’s wife also expressed her ordeal to our news team.