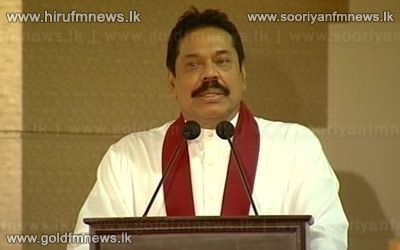 President Mahinda Rajapkase states that it is the responsibility of all to come together and work towards national unity and national development.

President Rajapakse made these statements while addressing the public after declaring open a number of development projects in Kilinochchi.

Speaking further the president stated that the people of the North need to be mindful of those who are willing to put them in the dark in order to obtain their petty political objectives.

Meanwhile, President Mahinda Rajapakse today opened the A9 roadway between Kandy and Jaffna which was restored at a cost of 20,000 million rupees.

The 153 kilo meter stretch from Galkulama to Jaffna was restored in this manner.

Meanwhile, President Rajapakse also declared open the Iranamadu air strip which was used by the LTTE, after restoration work on the runway was completed.

This 1500 meter long and 25 meter wide runway is considered the first runway to be designed and built by the Sri Lankan Air Force.

The runway was officially declared open after an MA 60 aircraft carrying the president landed at Iranamadu.