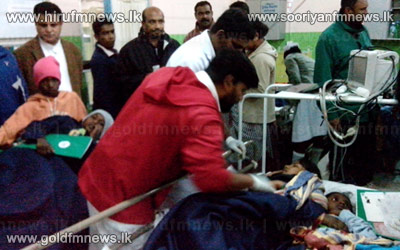 Four were killed and another 89 injured when a bus carrying school children fell into a 50 metre precipice in the vicinity of  Polgaha-vanguwa on the Nuwara-Eliya --- Welimada Road last afternoon.

Hospitals Director Dr. Aruna Jayasekara said that while the injured had by now been admitted to the Nuwara Eliya General Hospital, out of them nine had been transferred to the Kandy General Hospital as the condition of the latter had been serious.

The Director also said that there had been small children too among those severely injured.

These children who are students of  the Thaennekumbura Tamil School in Namunukula in Passara  have met with this accident when they were on an educational excursion.

Among the four dead are the driver and conductor of the bus.

President Mahinda Rajapaksa too last afternoon too took action to inquire about the accident.

Nuwara-Eliya Hospital Director Dr. Aruna Jayasekera said further that the President had instructed him to take all steps to direct the small children to their parents.