Complaints regarding LTTE sympathizers who protested against SL Cricket team in UK. 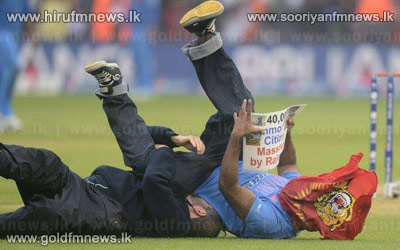 The External Affairs Ministry is concerned about a group of LTTE supporters carrying flags with Tiger Emblem and intruded to the Cardiff Cricket Ground during the ICC Champion Trophy Semi Finals yesterday.

External Affairs Ministry Secretary Karunathilaka Amunugama told our news team that instructions have already been given to the Sri Lankan High Commission in the United Kingdom to ascertain the facts and take necessary actions.

He also stated that the Sri Lanka High Commission has already made complaints to the UK Cricket Board and police regarding this incident.

Two LTTE supporters carrying flags with Tiger Emblems intruded into the grounds during the last balling of Sri Lanka against India yesterday and later another 5 of their companions followed suit.

Later police removed them, but another group of LTTE supporters staged a protest 500 metres away from the dressing room of the Sri Lankan cricketers.

Later the protesters have blocked the bus in which the Sri Lankan cricketers were traveling but allowed the another bus to proceed that was carrying Indian cricketers.

Indian media has given wide publicity today to the statements made by the protesting LTTE supporters.

However the Sri Lankan High Commission had requested the UK security authorities to pay special attention to the safety of the Sri Lankan Cricketers during the ICC Champion Trophy in Cardiff.

Meanwhile a discussion took place about this in parliament yesterday.

That was when UNP MP Dayasiri Jayasekera queried about the security provided for the Sri Lanka Cricket Team.