Daya Master comments on Chief Minister of the North 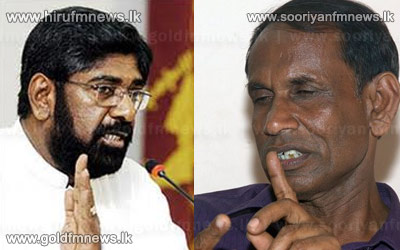 Minister of Mass Media Keheliya Rambukwella stated that it is the duty of a government to take necessary steps to ensure political stability in a country.

This was at a meeting that was held in Kundasale in Kandy today.

Much attention was drawn towards the 13th amendment to the constitution with the government’s announcement of the Northern Provincial Council election in September.

Minister Rambukwella stated that Journalists at the recent meeting with the President had questioned if the 13th amendment which introduced Provincial Council powers was merely a white elephant.

Minister Wimal Weerawansa speaking at the meeting expressed these views regarding the Provincial Council system.

Former LTTE Media Spokesperson Daya Master stated that the Chief Ministerial Candidate of the UPFA for the forthcoming Northern Provincial Council election will be announced during the next few days.

The Northern Provincial Council election is scheduled to be held in September.

Although there were reports stating that Daya Master would be UPFA’s Chief Ministerial Candidate, when we inquired from his regarding the matter he said that he is yet to receive such an invitation.

Meanwhile, the government’s attention has been drawn towards holding elections of the Northern, Wayamba and Central Provincial Council elections on the same day.

Sources state that the election would be held either on 7th or 21st of September.