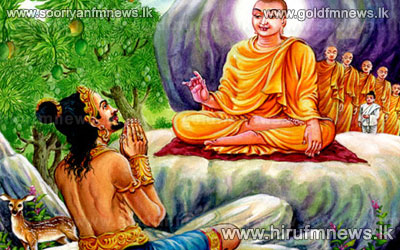 Today is the Poson full moon Poya day which commemorates the visit of Mihindu Maha Rahath thera to Sri Lanka.

The following is a special segment brought to you on the importance of the Poson Poya.

President Mahinda Rajapaksa stated that the sole objective of the government is to drive Sri Lanka towards a Dharmadhveepa along the exemplary path shown by Mihindu Maha Rahath Thera.

In a message in view of the Poson Poya Day the President stated that the visit of Mihindu Maha Rahath Thera to Sri Lanka was one of the greatest incidents that have taken place in the history of Sri Lanka.

With the arrival of Arahat Mihindu Thera, the country was bestowed with a great and civilized culture, a prosperous economy and a noble philosophy of life.

The President in his message went on to say that therefore, we should march towards progress giving the highest priority to the principles of tolerance with unity and determination.

Meanwhile, Prime Minister D M Jayaratne in his Poson message stated that it is noteworthy to see that the mission of Arahath Mihindu Thera paved the way to make Sri Lanka a country, a nation disciplined by norms and values of Buddhism.

The Prime Minister invites invite people belonging to all communities in Sri Lanka to join hands to build a society in which equity and peace is well established.