TNA in a discussion with South Africa 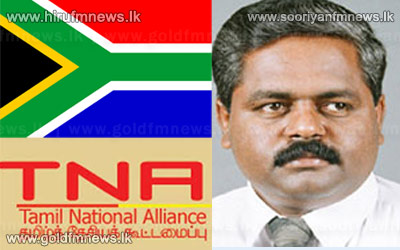 TNA Vanni District MP S. Sridaran says that a meeting is scheduled to be held between the Deputy South African foreign affairs Minister and the TNA in Colombo today.

The MP said further that his party representatives including its leader R. Sambandan is scheduled to meet South African Deputy Foreign affairs Minister Ebraham Ebram who arrived in the island yesterday.

MP Sridaran said that at this meeting focus was expected to be drawn on action taken with regard to the ethnic crisis that existed in South Africa.

The MP also said at this discussion attention would not be drawn on the 13th Amendment to the constitution and the Northern Provincial Council election scheduled to be held in the near future.

The TNA Vanni District MP Sridaran elaborating on the subject stated as follows:

TNA leader MP R. Sambandan had told Indian media that during the visit discussions had been held with Indian Prime Minister Manmohan Singh and a large number of Indian Diplomatic Representatives with regard to the 13th amendment to the constitution and the Northern Provincial Council election expected to be held in the near future.