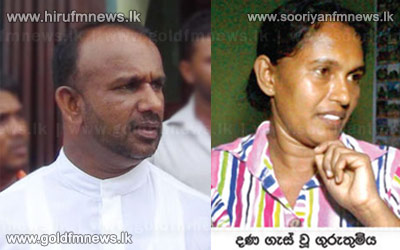 Education Professionals Association charged today that the Provincial Educational authorities are trying to alter the evidence given in connection with the incident in which former North Western Provincial Councilor Ananda Sarath Kumara forced a teacher to kneel down.

Addressing a media briefing held in Kurunegala today, the Association Secretary Wasantha Dharmasiri said that the Director of the Puttalam Educational Circuit visited the Navagaththegama Navodya Maha Vidyalaya on last 17.

He said, during the visit to the school, the Director had intimidated 3 witnesses including its Deputy Principal who have given evidence in this regard.

When our news team inquired from Director of Puttalam Educational Circuit Gamini Bandara, he rejected the allegations and said that he went to the Navagaththegma Maha Vidyalaya to control the tense situation which erupted on that day.

Susila Herath, the teacher who was humiliated by the former PC member was also present at the media briefing in Kurunegala today.

She said although she was given a transfer to Maha Uswewa Ratanapala Vidyalaya in Anamaduwa, she is scared to use the road to that school as it leads close to the former PC member’s house.

She requested the authorities to take her woe into consideration and give her a new transfer to the U.B. Wanninayake Vidyalya in Galgamuwa.

When our news team communicated the request of Susila Herath to Puttalam Circuit Educational Director Gamini Bandara today, he said that he is prepared to fulfill her request.

Meanwhile the Teachers and Principals Collective staged a protest against the former PC member forcing the teacher to kneel down in Nattandiya today as well.

The protesters requested all political party leaders to not nominate uneducated thugs to contest the forthcoming Provincial Council elections.