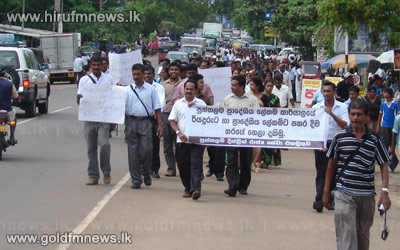 The protesters, wearing black belts and carrying black flags started the march from the Puttalam Divisional Secretariat premises and walked to Puttalam town.

After the protest held in Puttalam town today, Puttalam Additional District Secretary J.L.M.C. Bandara had this to say.

No suspect has been arrested so far in connection with the assault on the Puttalam Divisional Secretary and his driver.

The Puttalam Divisional Secretary who admitted to hospital after the assault is still receiving treatment at the Puttalam hospital.

When our news team contacted a senior police officer in the area, he said that the suspects in this assault incident have been identified.

He also said that several police teams are investigating to arrest the suspects.