Chandrika engages in a lengthy discussion with Malwathu chief prelate. 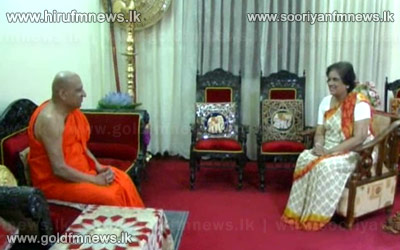 The closed door discussion between the Most Venerable Tibbatuwawe Sri Sumangala Thera and former President Kumaratunga continued for more than an hour.

As President Kumaratunga was leaving the Malwathu Maha Vihara premises, journalists asked her to comment on the discussion with the Chief Prelate.

Then President Kumaratunga said that she paid a courtesy visit to the Chief Prelate as she missed to do so for a long time.

When journalist asked whether she would proceed to visit the Chief Prelate of the Asgiri Chapter as well, she said that she would arrange another day for that purpose.

However NFF Leader Minister Wimal Weerawansa said that certain forces inside the government and outside of it are preparing to implement the Chandrika’s agenda.

Meanwhile Minister Wasudeva Nanayakkara says that the NFF acts against the 13th Amendment as that party cannot contest an election in the North.