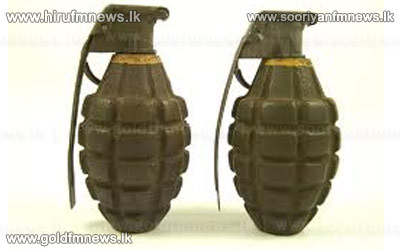 A parcel of explosives was found in front of the house of Rathgama PS Chairman Manoj Pushpakumara.

Pushpakumara told our news team that a servant of his house at Wellawatta in Hikkaduwa discovered this parcel of explosives last evening.

Hikkaduwa police said that a Bomb Disposal team of the Sri Lanka Army which rushed to the scene has defused the two hand grenades found in the parcel.

Pushpakumara said that media was used to carry out propaganda against him in the recent past.

However he said that he was not able to make any statement about how these grenades were placed outside his home.