Do not change the 13th amendment; Muslim Congress decides 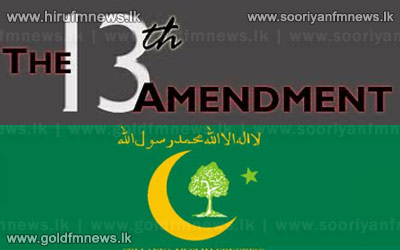 The Muslim Congress has decided to take a stand against the changes proposed by the government on the 13th amendment.

A Senior spokesperson stated that this decision was taken at the executive committee meeting that was held yesterday and stated that this was not necessarily an action against the government.

National Organizer of the SLMC Shafeek Rajabdeen expressed these views.

He also spoke regarding the PSC.

Meanwhile, the Tamil National Alliance stated that they will not participate in the parliamentary select committee appointed to look in to the national issue.

Leader of the TNA Parliamentarian R Sambanthan expressed these views.

However, Minister Keheliya Rambukwella stated that if relevant parties do not come forward to discuss the matter at a suitable forum as the PSC, the government will have to enact a solution that is suitable in its opinion.

Meanwhile, JHU Parliamentarian Ven Athuraliye Rathana Thera stated that the government not having clearly expressed its stance to India was it’s fault.