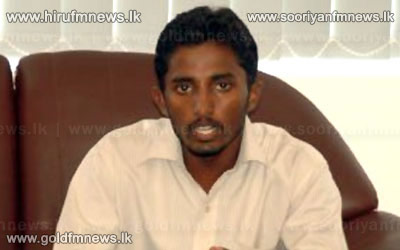 Colombo Fort Magistrate Thilinga Gamage issued summons today on Sanjeeva Bandara of the Inter University Student Federation to appear before Court on the 8th of July.

The Colombo Crime Division informed the Court today that Sanjeeva Bandara has violated the bail conditions by participating in a student protest held in Nugegoda recently.

Sanjeeva Bandara was arrested on the 19th of last September in connection with an alleged assault on 4 policemen and a police truck on the 29th of August 2012.

Later Sanjeewa was granted bail, on conditions that he could not participate in any unlawful assemblies.

Meanwhile the Inter University Students Federation has organised a protest march under the theme ‘Don’t make education a commodity and rise against destroying free education’ near the Higher Education Ministry tomorrow.

However addressing a media briefing held in Colombo this afternoon Higher Education Minister S.B. Dissanayake expressed his views about the march organised by the Inter University Students Federation.