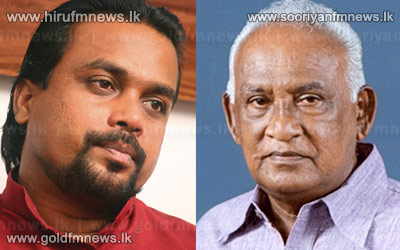 Mayor of Kaduwela G.H. Buddhadasa in his complaint to the Human Rights Council charges that Minister Wimal Weerawansa had organized a protest during the Kaduwla Municipal Council polls infringing election laws.

Although subsequently Minister Wimal Weerawansa and several other officials were ordered to appear before the Human Rights Council, the mayor of the Kaduwela chargers that the Minister was deliberately evading the summons issued to him.

Hence Mayor of the Kaduwela Municipal Council G.H. Buddhadasa states that he would seek to move the Supreme Court against Minister Wimal Weerawansa in a bid to have the recommendations of the Human Rights Council enacted.

Mayor of Kaduwela G.H. Buddhadasa made these revelations to the media subsequent to handing over a complaint to Elections Commissioner Mahinda Deshapriya at the Election Secretariat in Rajagiriya.

The complaint lodged by Mayor of Kaduwela G.H. Buddhadasa states that Minister Wimal Weerawansa has distributed mobile phones as well as traveling bags to Grama Seva officers in the Kaduwela Municipal Council jurisdiction at a juncture when the voter registration list is being amended.