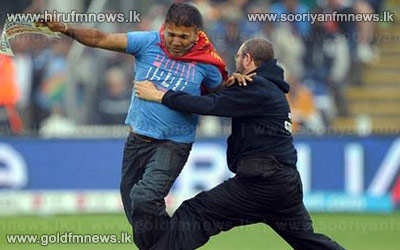 A warrant was issued through Interpol to arrest Logeswaran Manimaran who encroached into the pitch while the semi final match of the ICC Championship Trophy was being held between Sri Lanka and India in Cardiff.

Colombo Chief Magistrate Gihan Pilapitiya ordered the CID to present the warrant in English language in order to issue a global Red-Notice on the suspect.

The CID was searching for a suspect under the name of Logeswaran Manimaran in connection with a 30 million rupee teller-card scam.

The involvement of Logeswaran Manimaran was uncovered when the CID arrested 2 suspects in connection with the fraud and questioned them over its mastermind.

Later the CID found Logeswaran’s local national identity card and a bank passbook in a house at Kotahena.

The Investigations found that Logeswaran who received UK citizenship has no valid passport but used several fake passports to travel.

Meanwhile the CID matched the physical appearances and other details of the two Logeswarans after the Cardiff incident and confirmed that the man in Cardiff and the other suspect wanted in connection with the 30 million rupee teller-card scam was one person.

Accordingly the Magistrate also allowed the CID to inspect all local bank accounts maintained in the name of Logeswaran Manimaran.