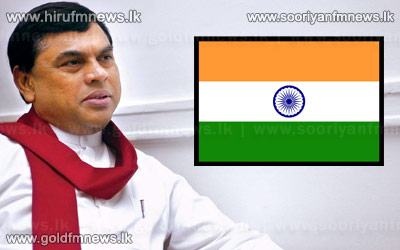 Economic Development Minister Basil Rajapaksa left for India today in a mission to educate the Indian authorities on the proposed change to the 13th Amendment.

In the capacity of a special representative of President Mahinda Rajapaksa, Minister Rajapaksa expects to educate the Indian authorities on the current local political situation as well.

Meanwhile addressing the press briefing held at the Information Department this afternoon to inform the Cabinet decisions, Cabinet Spokesman Minister Keheliya Rambukwella said that the government stance is to dilute the land and police powers of the 13th Amendment.

He further said that Minister Basil Rajapaksa is scheduled to inform the Sri Lankan government’s stance to the Indian leaders during his tour in New Delhi.