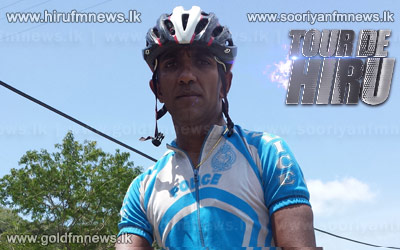 The first stage of the Sri Lanka’s largest cycle race – Tour de Hiru was successfully concluded at Balangoda this afternoon.

Tour de Hiru coincides with the 15th anniversary of Hiru FM and was organized by Hiru TV and Hiru FM.

With the starting signal given by Parliamentarian R. Dumindha Silva the first phase of the race which covered 137 kilometres started from Air Force grounds at 8.30 in the morning.

The race ran along the Galle Road via Dehiwala, Moratuwa, Panadura and turned on to Bandaragma road passing through Horana, Ingiriya, Kiriella and ended in front of the Bus Stand in Balangoda.

Sudheera Nilanga of Sri Lanka Police who won the first place of the first stage of Tour de Hiru expressed his views to our news team.

The second stage of Tour de Hiru will start from Balangoda at 8.30am tomorrow.