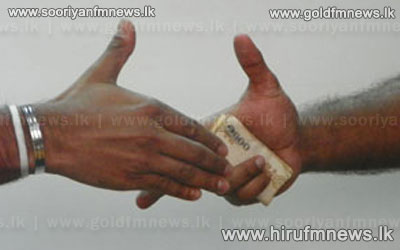 Chairman of the Kalutara – Walallawita Pradeshiya Sabha, Udeni Athukorala has been arrested by the Bribery and Corruption Commission yesterday afternoon for attempting to obtain a 1.5 million rupee bribe in the Meegahathanna region.

Upon inquiry by our news team a spokesperson for the commission stated that he is currently being further questioned.

It is reported that he attempted to obtain this bribe from the chairman of the Bentota Pradeshiya Sabha to provide a license to transport gravel.

Speaking to our news team, opposition leader of the Walallawita Preadeshiya Sabha Dileep Pitigala stated that he had received information that part of the bribe was obtained by Chairman of the Kalutara – Walallawita Pradeshiya Sabha, Udeni Athukorala.