We are not against amendments that are constitutional - says India 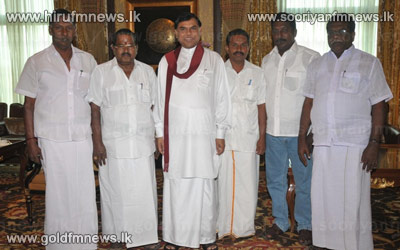 India states that it will not oppose any amendments that are made according to the constitution of Sri Lanka.

However, India has also stated that in order to accomplish that, the recommendations of the Parliamentary Select Committee should be taken into consideration and that the TNA should be a part of the PSC.

Expressing his appreciation for the announcement, Khurshid also emphasized on the need to fully implement the provisions of 13th Amendment and to go beyond it so as to ensure meaningful development of Sri Lanka.

He urged Minister Rajapaksa not to do anything to dilute the provisions of the 13th Amendment," official sources said.

In turn the Lankan Minister expressed his appreciation for the vast number of projects that are being undertaken by India especially in the Northern and Eastern provinces.

He stated that there was great appreciation amongst the people of Sri Lanka for the variety of projects being undertaken, especially the housing project which was proceeding extremely well.

Concerned over reports of Sri Lanka considering removal of land and police powers prior to the northern elections, Khurshid had spoken to his Lankan counterpart Prof. G. L. Peiris recently and underlined the need to leave the 13 amendment unchanged, urging Colombo not to take any step contrary to its own commitments relating to the Amendment.