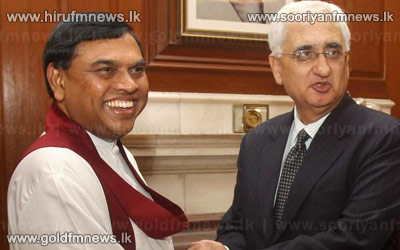 A group of high ranking Indian diplomats are scheduled to arrive in Sri Lanka in the near future for direct talks regarding the political situation in the country.

Indian National Security Advisor Shivshankar Menon is scheduled to arrive in the island tomorrow night and the Indian Minister of External Affairs, Salman Kurshid will also arrive in the near future.

Meanwhile, India welcomed Sri Lanka President Mahinda Rajapaksa’s announcement on elections in the Tamil-majority Northern Province, but asked him not to dilute the provisions of a promised political settlement known as the 13th Amendment plus.

Indian newspaper The Hindu reported that this request was made by Indian Minister of External Affairs, Salman Kurshid during Minister Basil Rajapakse’s visit to India.

Although the details of many bilateral tie-ups were discussed with the Sri Lankan Minister, Colombo had conveyed a day earlier that the main purpose of Mr. Basil’s visit was to inform India about his government’s plans to revisit the 13th Amendment.

Meanwhile the Indian news service IANS stated that the Indian Minister of External Affairs had requested from the Sri Lankan Minister of Economic Development to not dilute the provisions of the 13th amendment.

According to IANS, the India had also requested Sri Lanka to obtain the ideas of all in the Parliamentary Select Committee regarding changes to the constitution.