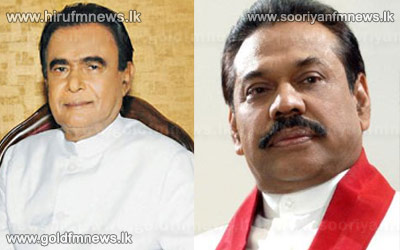 President Mahinda Rajapaksa in the wave of attacks launched on sacred Bodhgaya has stated that such attacks are a disgrace to the entire human race.

In a release issued by the Presidential Media Unit President Mahinda Rajapaksa has denounced these acts of cowardice.

Moreover President Mahinda Rajapaksa has extended his sympathy to the victims of this mornings attack which took place in Bihar.

Meanwhile Premier D.M. Jayarathna states that a request would be made of the Indian government to carry out an extensive investigation into this mornings attack.

Premier D.M. Jayarathna made this observation to the media during a pilgrimage which was made to the Sacred Temple of the Tooth in Kandy.

Furthermore the Sri Lanka Freedom Party in a release issued today has condemned this mornings attack on Bodhgaya.

It states that the Buddha Shashana as well as its philosophy could not be shattered by committing such acts of violence.

It also urges the Indian Centre to take steps to nab the perpetrators of these attacks.

Meanwhile UNP MP Joseph Michael Perera states that the Indian Centre should accept responsibility for the lack of security which led to this mornings attack.

Addressing a media briefing which was held in Colombo this morning UNP MP Joseph Michael Perera made the following observations.

Also voice his opinion in the wake of attacks launched on Bodhgaya, Leader of the JHU Venerable Omalpe Sobhitha Thero deplored the act of terror.