Pilgrims to refrain from visiting Bodhgaya until investigations are complete 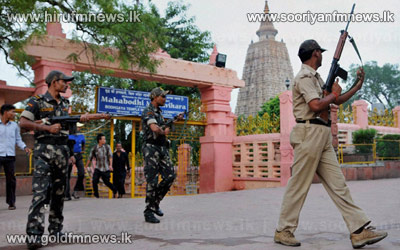 Sri Lankan High Commissioner in India Prasad Kariyawasam has requested of devotees visiting Bihar’s Bodhgaya to refrain from engaging in pilgrimages to the sacred site for a period of two weeks until investigations into this morning attack conclude.

Expressing his views to our news team High Commissioner Prasad Kariyawasam categorically stated that this mornings attack in Bihar was not aimed at Sri Lankan Buddhists or monks.

A spate of explosions took place within the premises of India’s Mahabodhi Temple complex this morning.

According to Indian media around 8 explosions had taken place during closely timed intervals.

Out of these explosions 4 had taken place within the Mahabodhi temple complex while 4 had been triggered outside.

The two monks have been admitted to hospital.

However no Sri Lankan casualties have been injured or killed during the explosions.

Incumbent of the Indian Mahabodhi Society Venerable Hakurugammana Sadhathissa thero was contacted by our news team in a bid to ascertain the latest details surrounding the incident.

While saying that the perpetrators had committed an unforgivable offence, he noted that security specialist had confirmed the explosions as an act of terror.

In a release the Indian Ministry of external Affairs added that two special teams one consisting of officers attached to the countries intelligence bureau had been deployed to carryout investigations into the incident.

In the aftermath of Bihars explosions this morning Chief Minister of Bihar Niteesh Kumar & Deputy Minister of External Affairs R.P. Singha arrived at the scene of the attacks.

Expressing his views to Indian Media----Deputy Minister of External Affairs R.P. Singha charged that the explosions were terrorist attacks.

Meanwhile Senior Leader of India’s Bharatheeya Janatha Party Ravi Shankar Prasad speaking to the media noted that it was disappointing that the attackers had succeeded despite many warnings on security threats.

At present according to the latest Indian media reports a peaceful atmosphere is said to prevail in Bihar, while investigations into the incident are said to be continuing along several avenues.