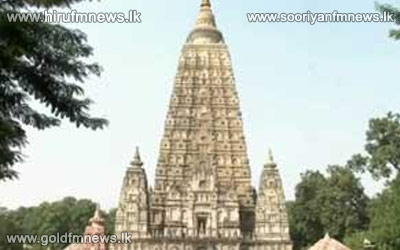 Indian Mahabodhi Societies’ Buddhagaya Centre Chief Incumbent Venerable Hakuru-gammana Saddhatissa Thero said that the Indian authorities had given an assurance about the safety of India’s Buddhagayaa Mahabodhi Buddhist Temple premises and its pilgrims.

A special discussion about the security of the Buddhagayaa Mahabodhi Buddhist Temple premises and its pilgrims was held with the participation of the area’s political leaders and India’s Security forces.

Venerable Hakuru-gammana Saddhatissa Thero said further that this decision was taken at this special discussion.

Sri Lankan High Commissioner in India Prasad Kariyawasam has requested of devotees visiting Bihar’s Bodhgaya to refrain from engaging in pilgrimages to the sacred site for a period of two weeks until investigations conclude.

Expressing his views to our news team High Commissioner Prasad Kariyawasam categorically stated that theattack in Bihar was not aimed at Sri Lankan Buddhists or monks.

A spate of explosions took place within the premises of India’s Mahabodhi Temple complex yesterday.

According to Indian media around 8 explosions had taken place during closely timed intervals.

Out of these explosions 4 had taken place within the Mahabodhi temple complex while 4 had been triggered outside.