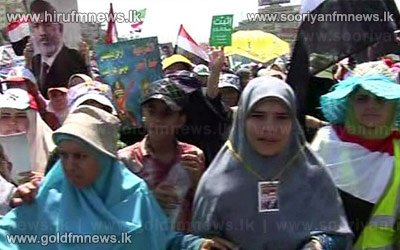 Tens of thousands of demonstrators are on the streets of Egyptian cities in rival shows of force by supporters and opponents of Mohammed Morsi, ousted as president by the military last week.

Morsi's supporters have gathered outside a mosque and a barracks in Cairo to demand his reinstatement.

Anti-Morsi protesters are rallying in the capital's Tahrir Square.

Morsi, Egypt's first Islamist president, is in detention, along with some senior Muslim Brotherhood figures.