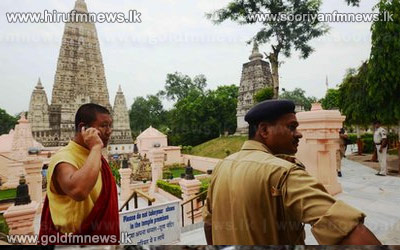 The Mahabodhi Vihara in Buddhagaya was reopened for pilgrims at 5pm today after it was shut down following the bomb attack that took place last morning.

Upon inquiry by our news team the chief prelate of the Buddhagaya Center of the Indian Mahabodhi Association Venerable Hakurugammana Saddathissa Thero made the following statement.

However, the Sri Lankan High Commission in India had requested Sri Lankan pilgrims to not tour India until investigations are complete.

However, upon inquiry by our news team the Sri Lankan High Commissioner to India Prasad Kariyawasam stated that Sri Lankans can tour Buddhagaya if they choose so.

A day after multiple blasts, regular prayers were organised at the Mahabodhi temple in Bodhdhagaya.

Earlier, the Bihar Police released CCTV footage of one of the blasts.

They have also detained a man named Vinod Mistry, whose identity card was found at the blast site.

Another terror suspect named Anwar Hussain Mallik was arrested with fake Indian currency from the Nadia district in West Bengal on Saturday.

After questioning today, the Kolkata police said no link has been established as yet between Anwar and the blasts.

Images of 2 other suspects were released to the media as well.

Chief Minister Nitish Kumar said he will ask the Centre to appoint the Central Industrial Security Forces to guard the world-famous temple.

The Bihar Police procured the CCTV footage from about 15 cameras installed in the temple and are examining it further for clues.

The bomb analysis report says the bombs were very similar to those used in Jaipur, Pune and Ahmedabad blasts.

The bombs were triggered by analogue timer clocks which were set for 5.30 am.

It also says 150-200 grams of ammonium nitrate was used as the explosive material in each bomb.

Meanwhile speaking at a press conference held in Colombo the secretary of the Bodhu Bala Sena Organization Venerable Galagodaththe Gnanasara Thero stated that the provincial government system in India is to blame for this attack.

The National Sangha Sabha also convened a press conference today and used the attack on Buddhagaya as an example to illustrate the adverse effects of the 13th amendment.

Speaking in this regard the secretary of the National Sangha Sabha Venerable Dombagoda Sara-nanda Thero made the following statement.