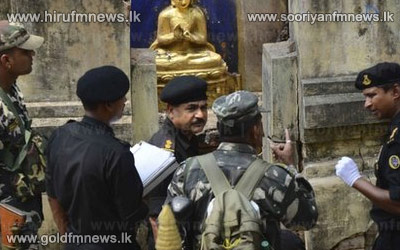 Six suspects, including a woman, have been spotted in CCTV footage by investigators probing the 10 bomb explosions at Buddhagaya's Mahabodhi temple in Bihar.

According to police officials, the CCTV footage shows three people entering the temple premises through unspecified entry points and two others stood near the gate close to the car they arrived in.

But officials are facing problems since the footage from the 16 functional CCTV cameras installed in the temple is of poor quality.

The officials of the National Investigation Agency, Intelligence Bureau as well Bihar Police are busy analyzing the CCTV footage in slow motion at the Budhdhagaya Temple Management Committee office here.

Police have issued a look-out notice for six people who had been working with the Budhdhagaya Mahabodhi Temple Management Committee for the last six months and are absconding after the serial bomb blasts.

Investigating agencies officials strongly feel that some of them are the suspects spotted in the CCTV footage.

BJP president Rajnath Singh today disappointed those who had expected a sharp attack on former ally Nitish Kumar for failing to secure the Mahabodhi temple in Bihar's Bodh Gaya, the site of multiple blasts on Sunday.

Rajnath Singh, who led a team of senior leaders on a visit to the heritage site this morning, refused to get drawn into criticising the Bihar Chief Minister, training his gun instead on the Congress-led UPA government the Centre for failing to check terror attacks.

He demanded a "comprehensive action plan so that any kind of terror attack, biological, chemical or cyber, can be countered,"

Meanwhile, the Organization of ‘We Buddhists’ held a protest march against the bomb attack on the Budhdhagaya Mahabodhi Temple in Hambantota town today.

Later they walked to the Indian Deputy High Commissions Office in Hambantota and handed over a petition.