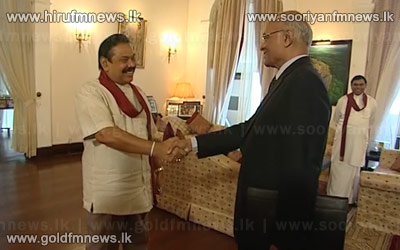 President Mahinda Rajapaksa, during a discussion with India’s National Security Advisor Shivshankar Menon, said the Parliamentary Select Committee is the best forum to reach a consensus on the implementation of the 13th Amendment.

At the meeting that took place at the President’s House in Colombo this morning, President Rajapaksa explained to Menon the practical problems that exist with devolving land and police powers to the provinces of a small country such as Sri Lanka and stressed that the structure that is implemented should apply and be acceptable to all parts of the country.

The President agreed with Menon that the participation of the Tamil National Alliance in the PSC is important.

President Rajapaksa said it is a top priority of the government to reach a consensus on the 13th Amendment.

The President also urged India to encourage the TNA to participate in the PSC and stated that the government is committed to taking the process forward despite any obstacles.

Shivshankar Menon arrived in Colombo yesterday to participate in the 2nd NSA-Level Meeting on Trilateral Cooperation on Maritime Security between India, Sri Lanka and the Maldives.

The governments of India, Sri Lanka and the Maldives have been engaged in trilateral discussions to address the common maritime challenges in the Indian Ocean region.

Following the meeting, the three-sides agreed on a roadmap for future cooperation in maritime security.

In this context, they signed an Outcome Document outlining further collaborative measures in the areas of inter alia Maritime Domain Awareness.

The next NSA-Level Meeting on Trilateral Cooperation on Maritime Security between India, Sri Lanka and the Maldives will take place in New Delhi at a mutually convenient time.

In these meetings, both sides reviewed the progress in bilateral cooperation and exchanged views on areas of common concern.

They expressed satisfaction on the progress in implementation of the Indian-assisted projects for relief, rehabilitation and resettlement of IDPs, including the Housing Project, as well as projects relating to the development of railway infrastructure in the Northern and Southern Provinces.

The National Security Adviser also met with other political leaders, including Leader of the Opposition Ranil Wikremesinghe, Leader of SLMC and Minister of Justice Rauff Hakeem, and a delegation of Tamil National Alliance led by R. Sampanthan.

Minister Rauff Hakeem commented on the outcome of the discussion held with Shivshanker Menon.