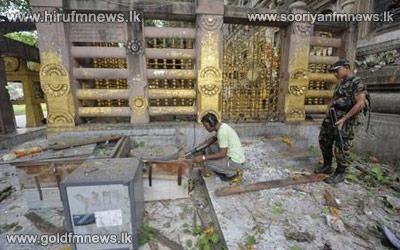 The activists of Ravana Balaya and Bodu Bala Sena Organisations staged a protest against the bomb attacks on the Mahabodhi Temple in Buddha Gaya in front of the Indian High Commission this morning.

The Bodu Bala Sena activists who started their march from the Colpetty junction joined the crowds of the Ravana Balaya who arrived at the Indian High Commission from the Galle Face roundabout.

After the protest campaign, Convener of the Bodu Bala Sena Organisation Kirama Wimalajothi Thera expressed his views to our news team.

Later Convener of the Ravana Balaya Iththekande Saddhatissa Thera had this to say.

The Indian National Investigation Agency has put up many posters in Bihar's Darbhanga district about suspected terrorists and also announced 1 million Indian rupee reward for anyone providing clues leading to the Mahabodhi temple bombers.

The posters also include the photos of alleged Indian Mujahideen terrorist Yasin Bhatkal.

Even three days after a series of blasts rocked the Mahabodhi temple in Buddha Gaya, security agencies and Bihar Police have failed to any major lead in the terror attack.