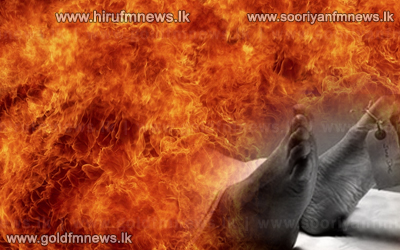 24-year-old Gauri received treatment at hospital for over 20 days after she self immolated over a family problem.

After the end of war, Gauri surrendered to the Army and received rehabilitation. Later she was working at a Garment factory at Telawala in Ratmalana.

A resident of Kilinochchi, Gauri had fallen in love with Anurudha Dahanayake whom she met at her work place.

Later they lived together in a hostal and Gauri had put ablaze herself over an altercation with Anurudha on the 21st of June.

27 years old Anurudha Dahanayake who is a resident of Deiyandara Matara described to our news team about the incident occurred on that unfortunate day.

The body of Gauri is lying at the Kalubovila hospital and the post mortem is to be held.