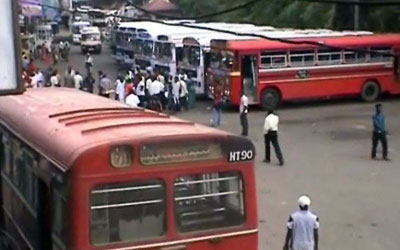 The Lanka private bus owners’ Association said that the private bus strike launched from last mid-night is carried out successfully.

This strike is being carried out in protest against the non-revision of bus fare due to be implemented from July 01st.

However Southern Province Private Bus Companies’ Federation said that it would not join this strike.

Southern Private Bus Companies’ Federation Chairman Chandana Soysa said that this was decided at a special meeting of the federation’s officials held yesterday.

SPBCF Chairman Chandana Soysa said further that in addition, Galle Passenger Transport Services Association limited affiliated to his federation too had decided not to participate in the strike.

Meanwhile the Polonnaruwa Passenger Transport Association Limited too said that it would not support the Lanka Private Bus Owners’ Association’s strike.

However All Lankaa Private Bus Companies’ Federation convener Anjana Priyanjith told our news team that the bus owners belonging to his federation were free to make an independent decision about the strike.

Sabaragamuwa Route Passenger Transport Authority Chairman Sanjaya Senaaratne told our news team that steps would be taken to cancel the permit of the buses  participating in the private bus strike carried out today.

However Private Transport Services Minister C. B. Ratnayake said that all actions that could be taken to stop the bus strike would be taken.

Transport Minister Kumara Welgama says that in this situation he was prepared to face the bus strike begun by the bus owners.

Speaking to our news team the Minister said that the SLTB had added close to 500 extra buses today.