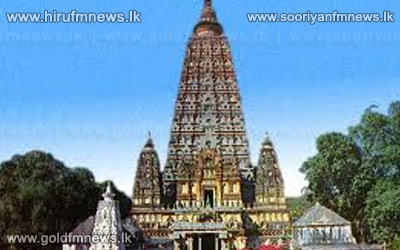 The Sri Lankan High Commission in New Delhi says that pilgrimages to Buddhagaya and the Mahabodhi Buddhist Temple could now recommence.

These sacred precincts were closed for pilgrims after a series of attacks took place on July 7th.

On the instructions of President Mahinda Rajapaksa the Sri Lankan High Commission in New Delhi held discussions with Indian authorities with regard to pilgrimage to Buddhagaya.

The High Commission said that an environment safe for Buddhagaya pilgrims had been created with the coordination of the Indian Central Government and the Bihar State Government.

Accordingly it has been emphasised that going on pilgrimage to Buddhagaya is not a problem.

Meanwhile Sri Swarnagiri Buddhist Federation Coordinator Venerable Dimbul-kumburey Visuddaananda Thero says that the Indian Government is directly not answerable with regard to the attack directed at Buddhagayaa.

The Venerable Thero said so when a delegation from the Deputy Indian High Commission in Kandy met him in connection with the attack.

Meanwhile participating at a media briefing on cabinet decisions held in Colombo yesterday, Minister Keheliya Rambukwella said that certain persons were trying to create non-existing problems on the pretext of the attack directed at Buddhagaya.