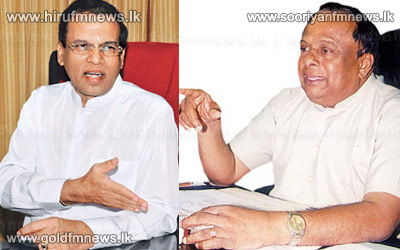 Addressing a ceremony held in Negombo today, SLFP General Secretary Minister Maithreepla Sirisena said that no parliamentarian would be allowed to contest the forthcoming Provincial Council elections on the SLFP ticket.

However Senior Minister S.B. Navinna told our news team that he is prepared to contest the forthcoming North Western Provincial Council election on the UPFA ticket.

He said he is even prepared to resign from his parliamentary post on the eve of his nomination day.

However answering about reports that have prevented current parliamentarians from contesting the forthcoming Provincial Council elections, S.B. Navinna had this to say.

When a journalist questioned Minister Maithreepala Sirisena regarding the statement made by Senior Minister S.B. Navinna, Minister Sirisena replied in the following manner.