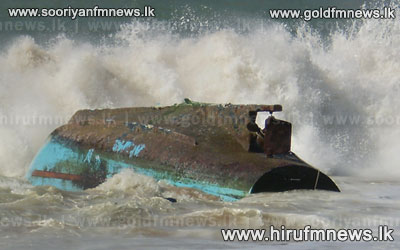 A fishing boat which had attempted to set sail from the Chilaw estuary last night has capsized resulting in the death of a fisherman.

According to fishermen in the area the boat had capsized due to the high tide season.

The deceased fisherman is a 37 year old resident of Wat-tak-kaliya Chilaw.

Another fisherman who had been thrown overboard during the accident continues to receive treatment at the Chilaw hospital.

According to police 24 boats which had attempted to set sail from the Chilaw estuary have capsized during the recent past, resulting in the death of yet another fisherman.

Members of the area’s fisher community charge that their pleas to authorities have been in this regard have been futile.

Meanwhile Deputy Minister of Fisheries Sarath Kumara Gunarathna was contacted by our news team against this backdrop.