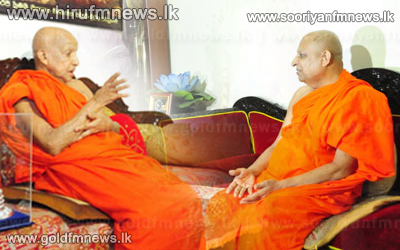 The Chief Prelates of the Malwathu & Asgiri chapters states that the government should take steps to abolish the 13th amendment to the constitution by utilizing the powers vested in it.

This was mentioned when a group of delegates representing the National Sangha Council met with the Chief Prelates this morning.

Several lay & clergy members including the Secretary of the NSC Venerable Dombagoda Sarananda Thero were present during the occasion.

Meanwhile Chief Prelate of the Malwathu Chapter Most Venerable Thib-batuwawe Sri Sumangala Thero expressed the following views during his discussion with members of the NSC.

Expressing his views subsequent to the day’s meeting with the Chief Prelates, Secretary of the NSC Venerable Dombagoda Sarananda Thero noted that the Chief Prelates had expressed their willingness to intercede in abolishing the 13th amendment to the constitution.

The Socialist People’s Front which consists of left-wing parties that support the government conducted a leaflet distributing campaign on the theme that the Northern Provincial Council election should be held and the Unitary State with PCs should be safeguarded.

Participating in the campaign which was held in front of the Fort Railway Station, leader of the Democratic Leftist Front Minister Wasudeva Nanayakkara said that the government does not need to postpone the North Provincial Council election.