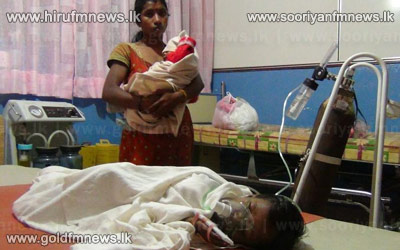 A one and half year-old girl child who received severe burn injuries after she was tortured by her step father was transferred to Navalapitiya Base hospital from Bogawantalawa hospital today.

The mother has wrapped the child in a cloth, covered her injuries and took to a doctor after she fell critically ill of burn and other injuries three days ago.

The mystery was unearthed when the doctor examined the child and found severe injuries including a broken tooth though the mother complained of flu.

Later, the doctors directed the mother to make a complaint with the police, and the paramour was arrested immediately in connection with child torture.

Chief Medical Officer of the Bogawantalawa hospital Dr. A.S.K. Jayasuriya told our news team that there is a risk of germ attack on the child due to her severe burn injuries so she was transferred to Navalapitiya Base Hospital.

This incident cannot be named another child abuse case in the country and taken for granted. Therefore we report this untoward incident prominently intending to make it an eye opener because there is another 6 month old baby under the care of this mother.