UNP ready for any election after 2 months; says opposition leader. 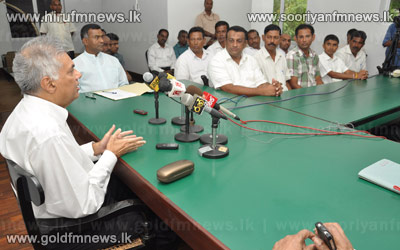 UNP party leader Ranil Wickramasinghe states that the party will be ready to face any election in two months time.

15 pradeshiya sabha members accused of assaulting the party headquarters in Sirikotha on the 19th of December of 2012 and for taking part in the political rally held at Hyde Park on the 18th of October of 2012 met with the party leader today.

The UNP had decided to pardon the members concerned after they served a probation period following the convening of the party central working committee.

Opposition leader Ranil Wickramasinghe made the following statement after the meeting with the pradeshiys sabha members.