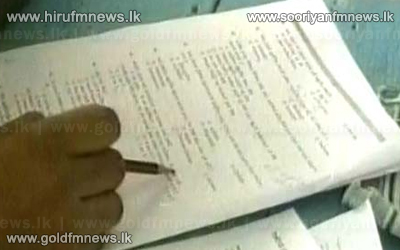 Issues regarding the term test papers of the North Central Province continued today due to part of the grade 7 mathematics paper not being given to the students and also as the required answer for a question in the grade 7 history paper not being on printed on the paper.

Our regional correspondents also stated that a delay occurred when issuing test papers from the North Central Zonal Educational Offices.

Speaking to our news team the chairman of the Lanka Teachers Association Priyantha Fernando stated that in several North Central Educational Zones questions 1 to 9 and 9 to 20 were printed in separate papers.

Speaking further chairman of the Lanka Teachers Association Priyantha Fernando stated that only the first paper was provided for certain schools and as a result the 2nd paper had to be photocopied and provided to the students.

Our news team inquired from the director in charge of the subject of mathematics Manel Wanigasekara regarding this.

Our news team inquired from the Provincial Educational Minister Peshala Jayarathane yesterday regarding the continuous issues plaguing the term tests in the North Central Province.

In response he stated that issues had arose due to a mistake that occurred during the printing process which was handled by the Government printers.

Upon inquiry by our news team from the head of the Government Printers Lalith De Silva regarding this allegation, he stated that he is ready at anytime to prove that the department did not commit any mistake.