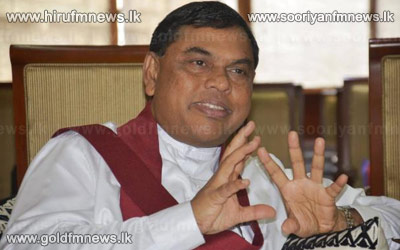 Economic Development Minister Basil Rajapaksa says that giving police powers to Provinces is against the Indo-Sri Lanka Agreement of 1987.

According to the Clause 2/10 of the Indo-Sri Lanka Agreement, the same mechanism used by the Centre should be employed to protect the law and order and security of the Northern and Eastern Provinces as well.

This Clause is a clear indication that the country should have one police force and not two or more than that.

Speaking to the Hindu, Minister Rajapaksa said that under these circumstances the demand for police powers to Provinces under the 13th Amendment cannot be accepted.

Minister Rajapaksa met his Indian counterpart and the National Security Advisor during his recent tour in New Delhi.

The Hindu newspaper has published Minister Rajapaksa’s full interview on its edition today.

In his interview, the Minister however did not reveal a time frame to give provisions on police powers to Provincial Councils.

He also stated that it’s a continuous process therefore it may take years to come to a conclusion.

Journalists questioned Minister Basil Rajapaksa about his India tour during a ceremony held in Colombo, and the minister had this to say.