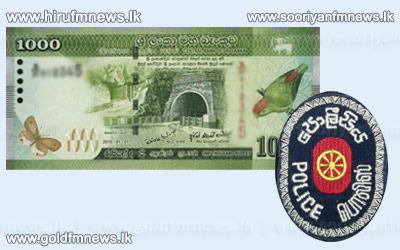 The Agunakolapelessa Magistrate has lodged a complaint with the Homagama Police requesting an investigation to be carried out over a fake currency note received by him.

The Magistrate who had travelled along the Southern Expressway had provided a 1000 Rupee note at the Kottawa expressway in order to pay the fee and it had turned out to be a fake currency note.

Accordingly, the Magistrate has requested the Police to conduct an inquiry.

A courts employee had cashed a cheque worth 14,000 Rupees from a state bank and this is believed to be among those notes.

However, investigations regarding the incident are being carried out by the CID.

Another such incident was reported from the Welipenna entry exit point on the Southern expressway on the 14th but it later turned out to be that it was a legitimate note.

Hence we inquired from Minister of Highways Nirmala Kothalawala if there was an issue with the devices placed at the entry exit points of the highway but the Minister denied any such faults in the devices.

Meanwhile, we inquired from Former Deputy Governor of the Central Bank Dharma Dheerasinghe on how to identify fake notes.