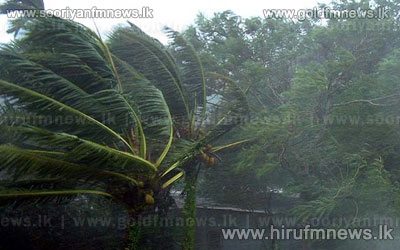 The Department of Meteorology states that heavy rain could be experienced in the western slopes of the central hills during the next few hours.

Meteorologist on duty Channa Rodrigo said that strong wind could affect the areas in the North Western Province.

Meanwhile the highest rainfall of 44.9 millimeters was reported from Ratnapura during the last 24 hours.

Colombo reported a rainfall of 32.2 millimeters during the same period.

Public roads in the city were blocked at several places in Colombo after trees were uprooted due to strong wind and heavy rain this morning.

Due to heavy rain experienced in the catchments, steps were taken to open the spill gates of the reservoirs at Lakshapana, Canyon, Castlereigh and Upper Kothmale.

Deputy Director of the Disaster Management Center Pradeep Kodipillai commented to our news room about the situation.