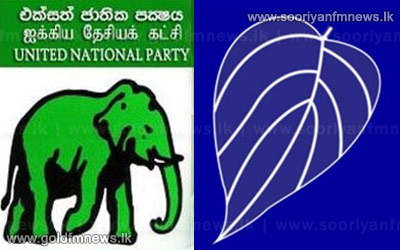 After MP Dayasiri Jayasekara announced his resignation from his parliament post, he called a special media conference in the parliament complex, along with Ministers Dallas Alahapperuma, Rohitha Abeygunawardana and MPs R. Dumindha Silva and Manusha Nanayakkara.

Journalists questioned Dayasiri Jayasekera if he is to contest in the North Western Provincial Council election as the UPFA Chief Ministerial candidate.

Later Jayasekera said that 48 UNP PS members have discussions with him in order to join the government.

Our news team reported several times in the past about former UNP MP Dayasiri Jayasekera’s plan to join the government.

However when contacted on the 16th of July to verify the speculations about his plans to change sides MP Jayasekera responded to our news team in this manner.

Addressing another media conference held by the UNP today, MP Hareen Fernando recollected about his assertions made public about MP Dayasiri Jayasekera.